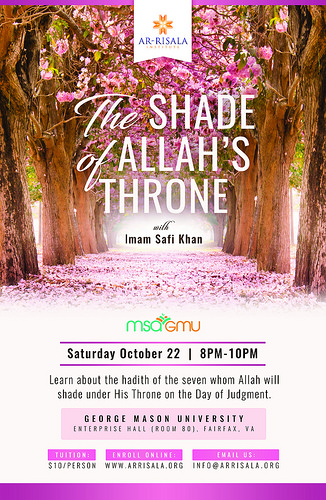 The Shade of Allah’s Throne

Attend Ar-Risala’s upcoming seminar at George Mason University to learn more in depth about the special seven categories of people whom Allah will save and protect on the Day of Judgment.

The Prophet Muhammad (sal Allahu alayhi wa sallam) said:”There are seven whom Allah will shade in His Shade on the Day when there is no shade except His Shade: a just ruler; a youth who grew up in the worship of Allah, the Mighty and Majestic; a man whose heart is attached to the mosques; two men who love each other for Allah’s sake, meeting for that and parting upon that; a man who is called by a woman of beauty and position (for illegal intercourse), but be says: ‘I fear Allah’, a man who gives in charity and hides it, such that his left hand does not know what his right hand gives in charity; and a man who remembered Allah in private and so his eyes shed tears.’” (Abu Hurairah & collected in Saheeh al-Bukhari)